Gender Equality in the Home During COVID-19 – An Imagined Reality?

by William Huston, AIF®, AIFA® in Personal FinancePublished on April 13, 2022 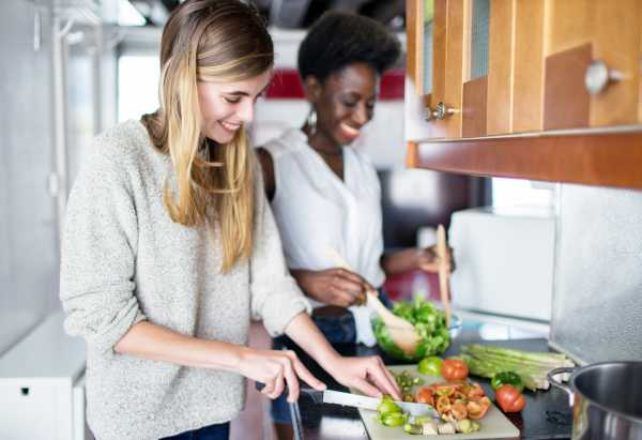 My parents believe in egalitarianism and equality, and this is and was practiced in our home. Growing up, I believed equality between the genders was a given. However, studying sociology at university showed me that an equal division of housework in two-parent households is still the exception and not the rule. Gender inequality in the home still runs rampant.

Many mothers work “a second shift,” completing their nine-to-five job before turning to an evening of unpaid household duties.

Of course, significant progress has been made with women’s employment over the past several decades, indicated through women’s workforce participation and education attainment. In 2020, the U.S. Bureau for Labor Statistics found that women represented almost 47 percent of the total labor force (both full- and part-time employment).

Women are also now more likely to obtain higher levels of education, a study by the National Center of Education Statistics highlights. The most recent data shows that women earn more than half of all bachelor’s degrees (57.3 percent), master’s degrees (60.1 percent), and doctoral degrees (53.5 percent).

The COVID-19 crisis, however, seems to have undone some of this progress. At the beginning of the pandemic, women’s jobs were considered 1.8 times more vulnerable than men’s, with women’s employment levels dropping faster than average globally, according to calculations by consulting firm McKinsey and Company.

Women in the United States had the cards stacked against them: In the first two months of the pandemic, they lost 12.2 million jobs — U.S. women were 20 percent more likely to lose their job during that period than were their male counterparts, according to the Bureau of Labor Statistics.

Additionally, 5.5 million of those jobs had not yet returned as of the end of December 2020; women bore the brunt of job losses at 55 percent and have not made up any appreciable ground during the recovery.

The Reality of Work-Life Balance

With this change, my father started to cook our evening meals, do school runs, and engage in day-to-day housework. No matter whose career was more demanding at any point, both my parents undertook household duties and childcare and tried to divide responsibilities equally, taking the other’s time availability into account. Research, however, shows this is not the norm.

Gender inequality at home is.

Though many working parents experience conflict when balancing work and family responsibilities, even before the pandemic, the burden tended to disproportionately fall on mothers, according to research presented by The National Library of Medicine. Today, care work performed by women and girls contributes an equivalent of $10.8 trillion to the global economy, according to an Oxfam report.

Measures have been put in place to try and bridge the gender inequality in the home, and under the Family and Medical Leave Act, men are granted 12 weeks of unpaid paternity leave.

However, the United States is the only member of either the European Union or the Organization for European Economic Cooperation and Development (OECD) that provides no paid parental leave, according to data compiled by the OECD.

The coronavirus has led to unprecedented disruption across political and economic spheres. But the social challenges are equally turbulent, as many families continue to juggle working from home, homeschooling or remote learning, and meeting an increased need for eldercare.

A recent McKinsey report reveals that though working women and mothers are no strangers to a second shift, the onset of the global pandemic upended many of the support systems that helped them advance their career while raising children, such as school and childcare.

Diane Vukovic, founder of Mom Goes Camping is married with two children, ages 2 and 10. Though she and her husband work full time, she admits that most of the household duties fall on her.

Lockdown added additional challenges for Vukovic and her family: Both she and her husband worked from home, while homeschooling their older child and looking after their toddler. Vukovic’s work, being more flexible than her husband’s, took the biggest hit.

“Even though my husband wanted to help around the house, somehow the bulk of the housework ended up on me,” Vukovic says. “I was the one who would help our older daughter with homework. I was the one who made meals while our toddler was napping.”

Vukovic also describes herself as “project manager” of the house: Organizing groceries, planning activities for her children, and putting provisions in place for her husband’s elderly parents have fallen to her.

“The mental load of keeping the household functioning during COVID fell on me. Instead of relaxing during any rare moment of downtime, I would be thinking about what needed to be done today, tomorrow, and next week.”

Guidance counselor Claire Reardon who is married with three children, ages 8, 10 and 14, has had a similar pandemic experience. Because her husband’s workload tends to be more demanding, she juggles work, homeschooling, housework, raising their children, and looking after her 87-year-old mother.

Reardon describes herself “as constantly on the road” whether buying groceries, taking her mother to doctors’ appointments, and running various errands.

She admits that there was a trade-off between her work and homeschooling, and if there was a particular day where she had multiple video conferences, her youngest child, who needs a lot of supervision with schoolwork, fell behind. Caring for her mother and other domestic demands also often took precedence over her career as well as her self-care.

The Challenges of Remote Learning

Prior to COVID-19, many women and mothers knew how to be flexible, as a result of balancing both work and home responsibilities, says Sarah Wilson, Ph.D., senior lecturer of sociology at the University of Stirling, Scotland.

The pandemic exacerbated this need for flexibility. Some men who worked from home during the COVID lockdown, however, were not accustomed to being flexible.

Instead of building new, cooperative routines, Wilson notes, they attempted to import their work culture into the household, putting in normal working hours and continuing as if there were no children at home. As a result, research suggests that women tended to pick up the slack, Wilson adds, leading to gender inequality at home.

Wilson describes homeschooling as “a disaster,” with responsibility mostly diverted to mothers, based on what she anecdotally observed. Wilson says she never before heard of so many women considering giving up their jobs, citing the pressure and time commitment involved in the supervision of remote learning.

A study released in July, which utilized the U.S. Current Population Survey, found that mothers with young children reduced their work hours four to five times more than fathers did, which possibly could be attributed to school and daycare closures, causing the gender gap in work hours to grow by 20 to 50 percent.

What Can Be Done to Support Working Mothers?

For noteworthy change to happen, Wilson insists that structural issues in the workplace need to be addressed, to support both women and men in their care responsibilities. Affordable and flexible childcare is paramount in relieving the heavy burden of domestic duties on women, Wilson adds.

_Additionally, workplace culture has to adapt, in order to challenge “the breadwinner and homemaker models.” _

In the business world, an attitude of what happens at home should stay at home still permeates many workplace cultures, which increases gender inequality in the home as well.

Though there has been notable progress when it comes to women competing in the workforce over the past few decades, the ideal worker is still a person who somehow magically manages all caregiving responsibilities without any support for work-life balance.

Matt Erhard, managing partner of professional recruitment firm Summit Search Group, understands the struggles of working parents, and in particular working mothers, during these unprecedented times. He suggests “figuring out exactly what you need to make things work, and don’t be afraid to ask for it.” Erhard stresses that many managers and business owners often want to help, but simply don’t know what they are not told. “If you go into a meeting ready to give a possible solution and explain how those changes will help, you’ll be more likely to get a positive response,” he says.

He suggests emphasizing how what you are asking for will make you a better and more productive member of the team.

Demonstrating that you appreciate the company’s needs for productivity will increase your chance of successful negotiation. You may not always get what you want, but opening the door fosters an open and honest relationship with your manager and can provide leverage for further negotiations down the line.

The complex realities of balancing a career and a family mean that a multifaceted approach is necessary when it comes to instilling real change. There are multiple steps that parents can take in order to create a family-friendly work-life balance by addressing issues with their significant other, employer, and even financial planner.

Siobhan Olofsson, life coach, couples counselor, and author of I, Unlimited, says that the COVID-19 crisis has been a rude awakening for many modern women.

“Now is a great time for each woman to reflect on what this extraordinary episode in our lives has taught us in terms of what balance, equality, accountability, and responsibility mean in our own unique relationships with our significant others,” says Olofsson.

“Communication opportunities between parents should be routine and regular in order to establish what you value in your relationship together, and how you create an equitable working partnership that works for both of you,” she adds. “It’s not always just about who does the washing up!”

The ongoing pandemic has been challenging for everyone. Communication is key to building a working relationship with your partner and your employer. Don’t be afraid to ask for what you need. Set an example, and perhaps other women will be inspired. Do your research so you can present a solid plan that benefits both you and your employer.

“In the corporate sphere, and indeed across all sectors, there is still this idea that as a worker, you should leave homelife at the door,” says Wilson. “Everything in the workplace should be ‘clean and tidy,’ disregarding the ‘mess’ that is always going to be homelife.”

For true progress to be made in gender equality, Wilson urges that this corporate culture needs to be addressed and that what is needed is an all-encompassing approach, beginning with the implementation of flexible and affordable childcare. From there, they should work on examining structural issues within the workplace, educating boys and men to be supportive of womens’ careers, and critically, breaking down the attitudes that divide workers, particularly women, into employees with children and employees without.

More posts by William Huston, AIF®, AIFA®
Previous PostA Bed, a Bank, and a Budget: How to Build a Financially Responsible Marriage
Next PostShould I Pay for My Child’s College? I Don’t Think So